Looking at which audiences are most and least willing to attend live events in the near future and which are more or less likely to have already booked for them.

In terms of COVID safety, which best describes your attitude to attending...? 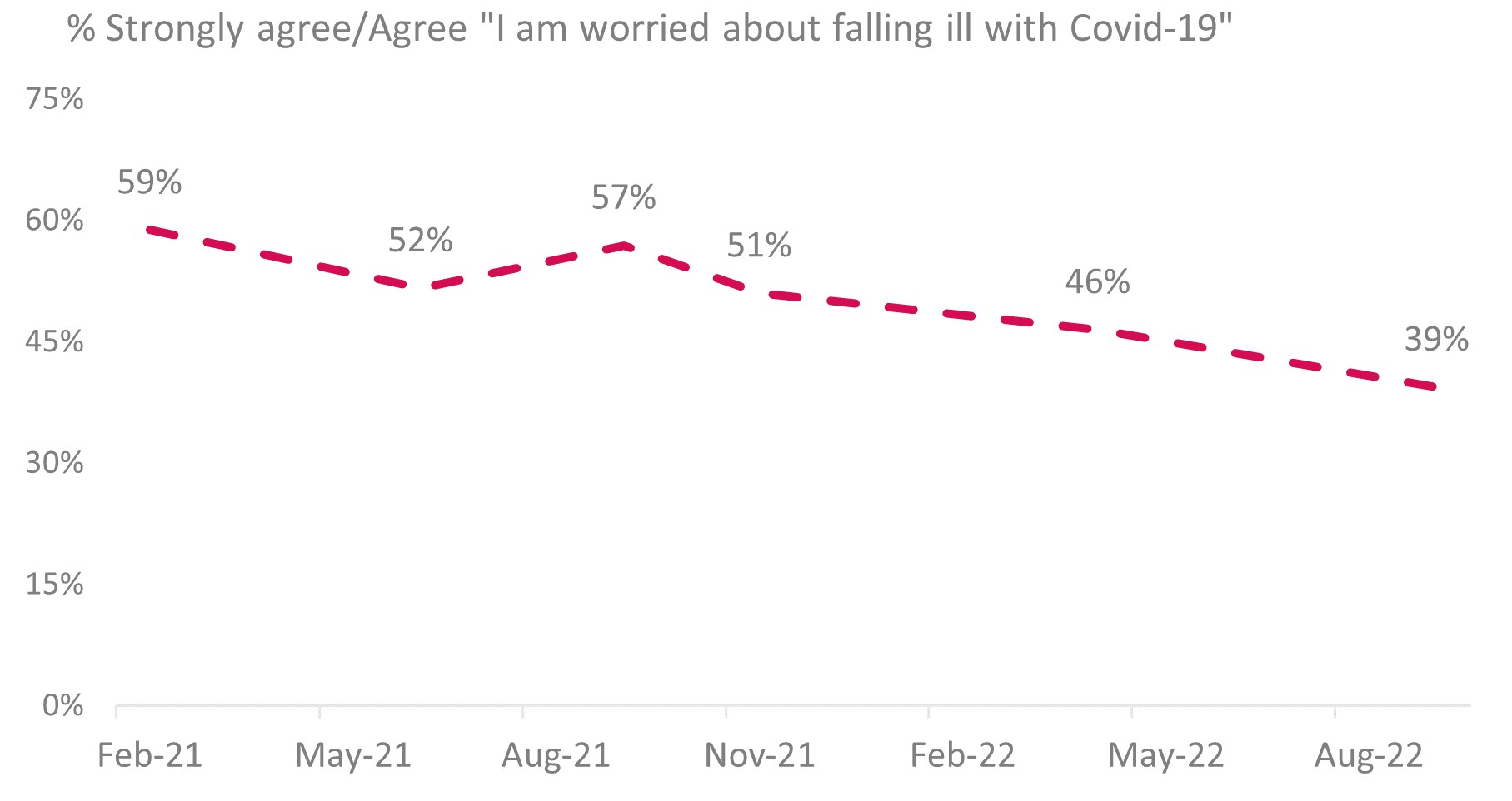 Willingness to attend in the wake of the pandemic has continued to recover since Spring 2022, with over half (52%) saying that they are ‘willing to attend’ (and 75% saying they ‘are happy to attend’ or ‘would consider attending with reservations’). 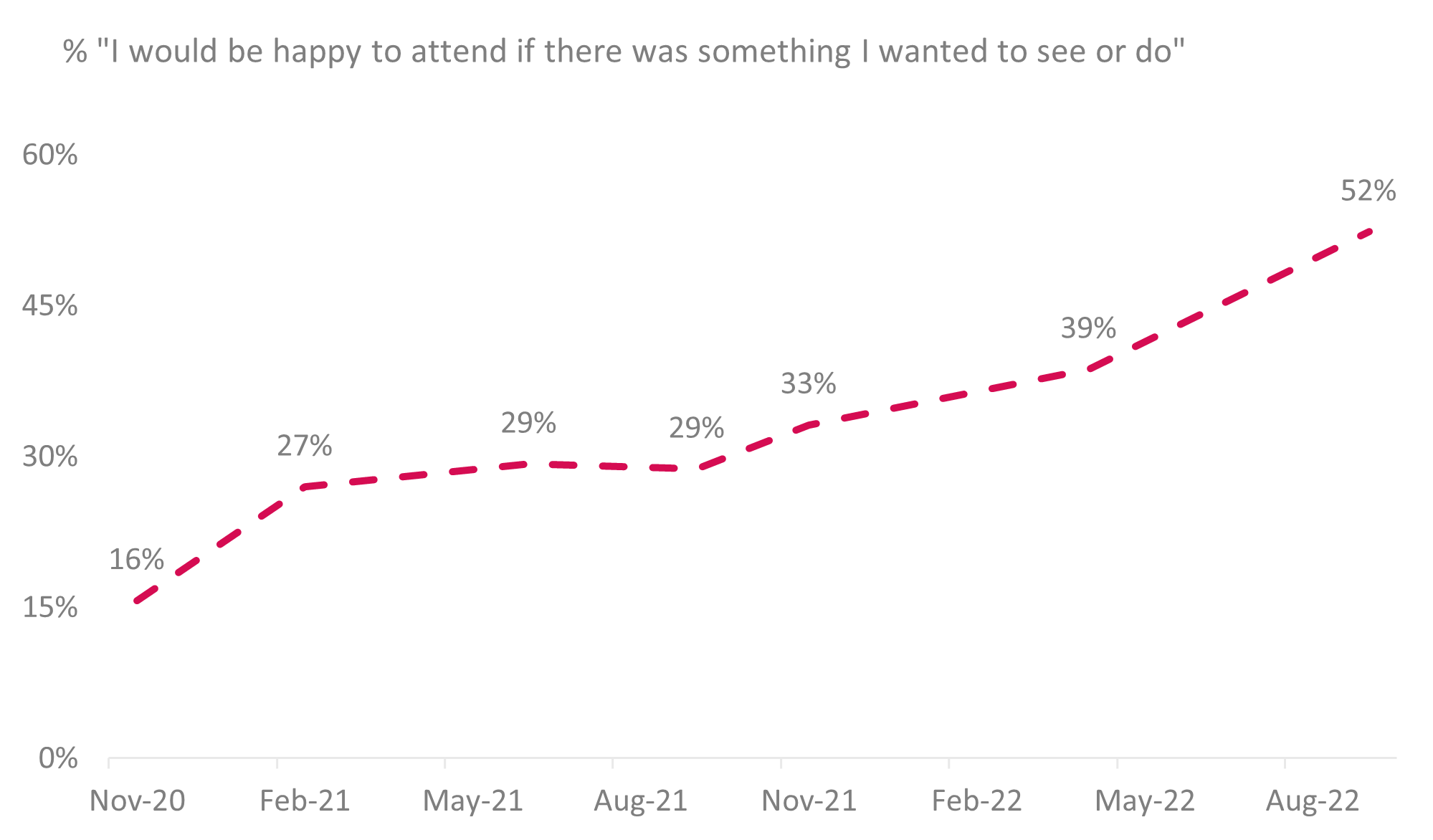 Browse our previous findings in more detail and see how the picture differs now from what we were seeing before the world opened up again...

Perceived Covid-19 related risks are decreasing, while willingness to attend events, especially outdoors, is rising. Willingness to attend overall is up to 39% saying they are ‘happy to attend’ (from 30% in November 2021), whereas 20% people cite Covid-19 as a reason they don’t want to attend.

Attitudes to Covid-19 are still very divided, with the public holding a broad range of viewpoints.

At an individual level though, people are generally more consistent with assessing risk, or being willing to attend events relative to their attitudes to Covid-19, than this overall picture may suggest. Meaning that the same people who think the threat is low and that we should be getting back to normal, are happy to return to indoor events and plan to spend the same amount on entertainment.

The groups more/less likely to attend

Older people and those with disabilities or long term health conditions remain the most cautious about 'getting back to normal', while under-25 year-olds are leading the return charge.

The headline figures have changed little over the three waves. The main difference that does exist from June to September is that fewer people gave the ‘middle’ response of being comfortable to attend only with significant reduction in risk, but more said they ‘would not be interested’ all together. 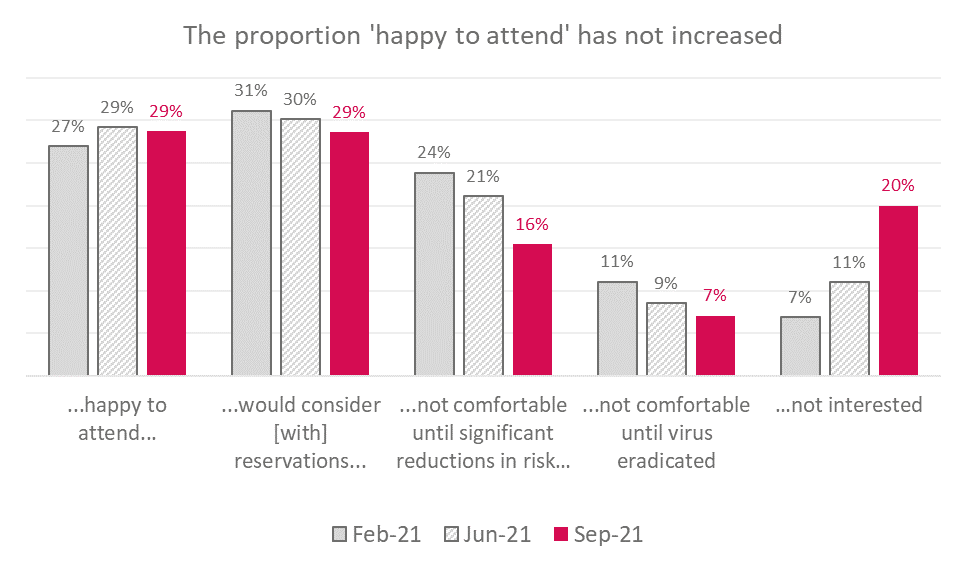 Older retirees and people with disabilities were particularly more likely to say that they are 'not interested' in attending live cultural events in September 2021 than had been true in previous waves. Whilst these groups' specific reservations may go some way to explaining the spike, the finding does indicate an overall hardening of people's positions moving into the new normal, with attitudes from previously ambivalent groups now moving from 'I'm hesitant right now' to 'it just doesn't feel safe/right for me'.

Within Wave 4, there were also notable differences between demographic groups (focusing in particular on those who said they were ‘happy to attend’ or ‘would consider with reservations’).

Those more likely to be ‘happy to attend’ were: 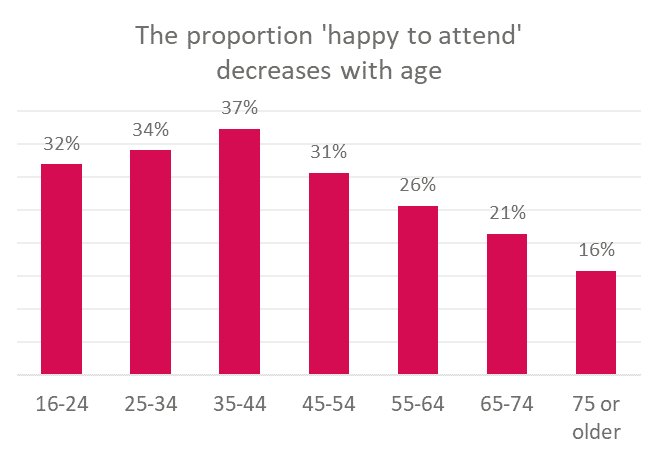 We also asked how important different types of safety measures were for people to feel comfortable attending, for both indoor and outdoor events. The proportions saying ‘very important’ for each were: 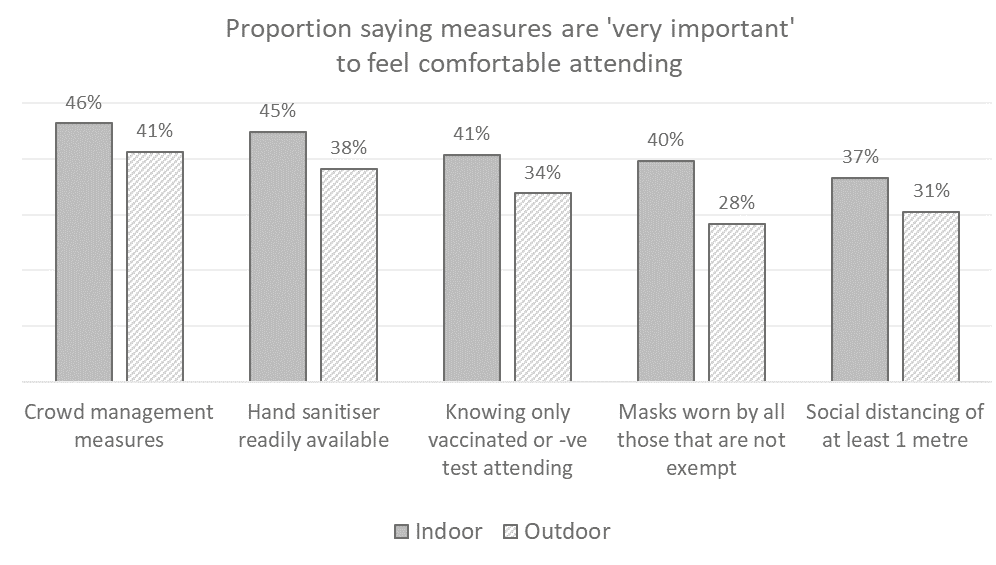 Hand sanitiser remains prominent, despite airborne infection being the principle source of transmission.

In terms of ‘vaccine passports’, it is notable that 82% considered that for indoor events ‘Knowing that only those with a vaccination record or a negative COVID-19 test are attending’ was ‘very important’ or ‘important’.

There were demographic splits on this measure, with higher proportions rating it as ‘very important’ who were: 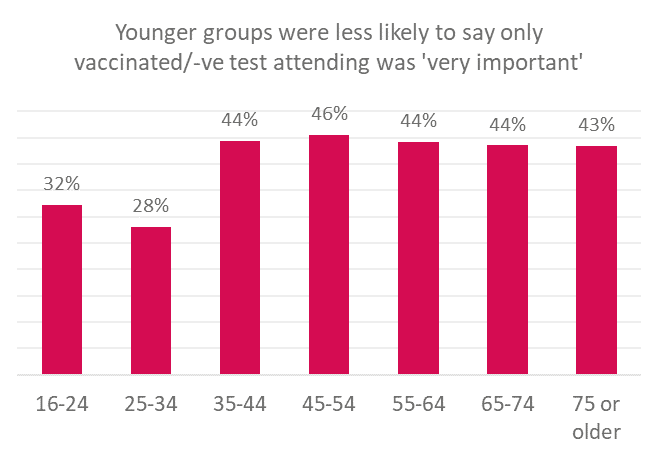 Again, these results varied by demographics. For indoor events, those who ‘strongly agreed’ were more likely to be:

A tale of three stances 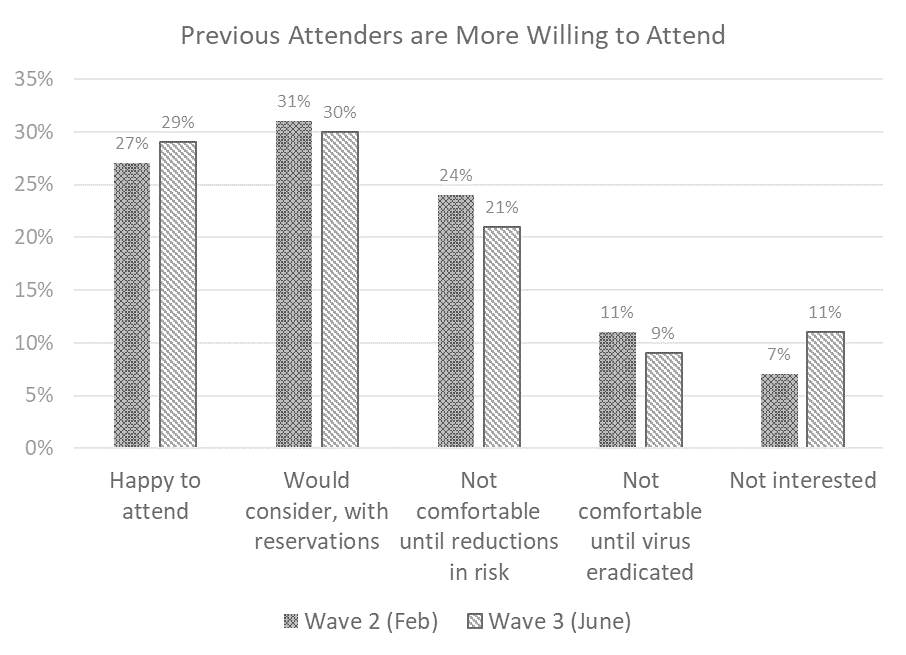 There are marginal differences in people’s confidence to attend particular types of events. 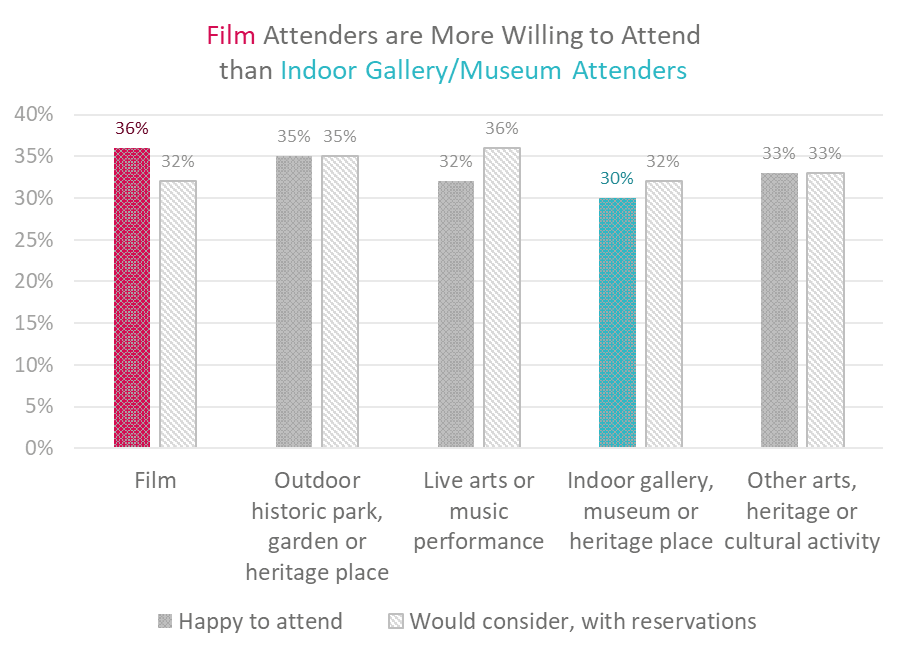 Attitudes vary more by audience 'type' than by artform. 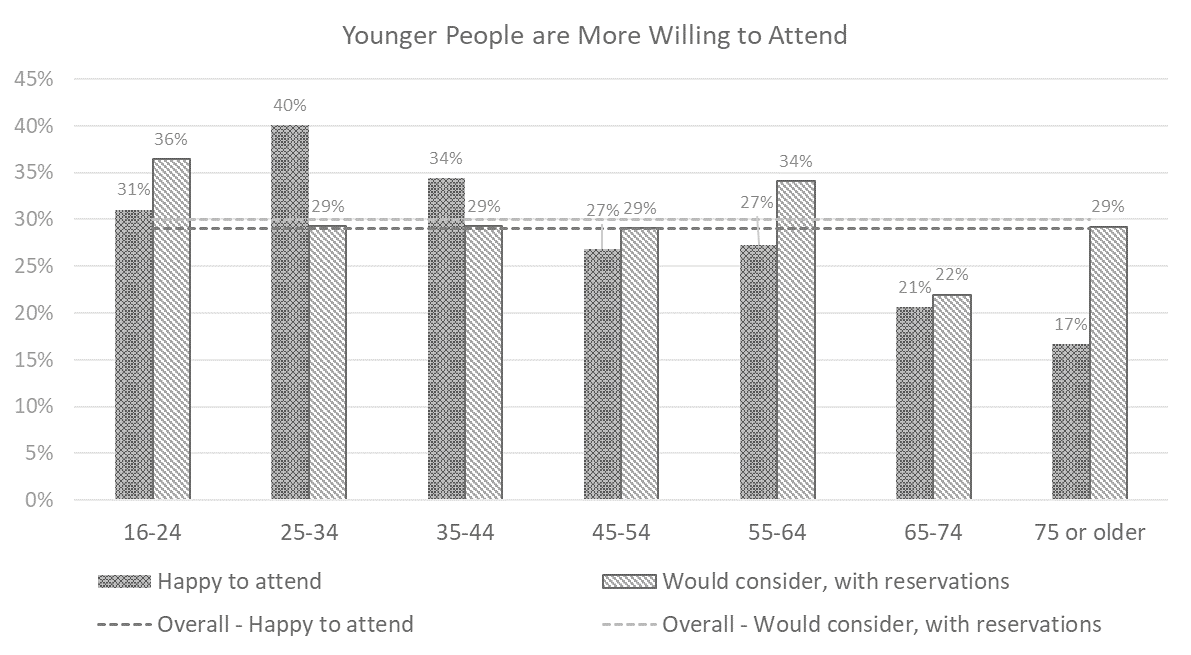 In terms of Covid-19 safety, which best describes your attitude to attending...?

Who is more/less likely to attend in person now?

Who is more/less likely to book a live event at the moment?

*See our report ‘Between Lockdowns’ for details.

See the full report with charts and graphs

MORE RESEARCH ON AUDIENCE BEHAVIOURS, ATTITUDES AND EXPECTATIONS DURING COVID:

Overall there is much increased willingness to attend events and optimism about future attendance, though some groups continue to be especially concerned, with disabled people less likely to be willing or able to attend. 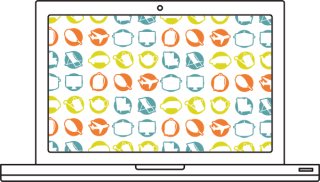 Audience Spectrum in the Context of COVID-19

Understand the impact of lockdown on the behaviours of different Audience Spectrum groups. 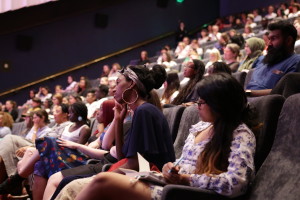 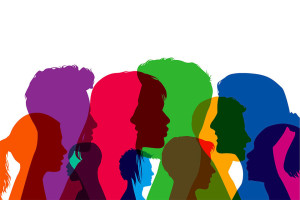