Agent 007.1 looks at the new release on Culture Statistics from the EU.

If you have the time and inclination you might be interested in leafing through the latest (204 page) EU report on Culture Statistics.

This annual report from the Eurostat department at the EU

“… presents a selection of indicators on culture pertaining to cultural employment, international trade in cultural goods, cultural enterprises, cultural participation and the use of the internet for cultural purposes, as well as household and government cultural expenditure.”

Of course, we turn straight to Page 123 for the section on Cultural Participation. In fact, this section comes mainly from a 2015 study which found that 64% of the EU (EU28 + Iceland, Norway and Switzerland) adult population had taken part in a cultural activity in the past year.

As usual in such studies, the Nordic countries have the highest levels of cultural participation, with the Western / Central European states like the UK, France and Germany in the middle and the Southern and Eastern states at the other end of the range. However, 007.1 is unsure just how much this relates to actual participation and how much to cultural variations in definition of participation. We know from our work in the UK how difficult it is to be precise in just one country, but at a wider European level it becomes even harder to be consistent. 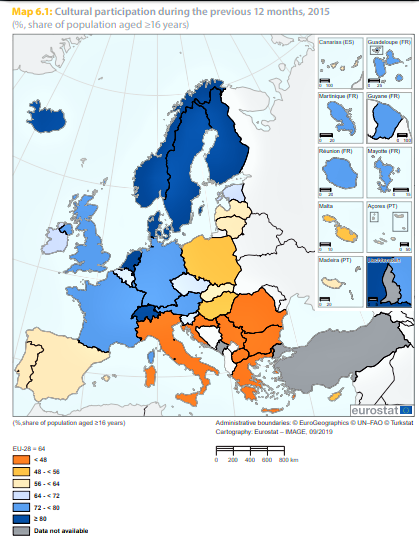 It is when we move beyond the headline results that the data becomes more interesting. There are, for example, encouraging signs in terms of youth participation with (overall) participation higher amongst younger people. According to the study, 83% of people aged between 16 and 29 have had one artistic experience in the last 12 months, compared with 53% aged between 65 and 74.

There are also some more familiar or predictable patterns reported. Participation is linked strongly to ‘educational attainment’ (level of qualification attained). People with a tertiary level of educational qualification were more than twice as likely to take part in cultural activities as people with non-tertiary levels. This pattern is reproduced across every state in Europe and, interestingly, for those countries with higher levels of participation overall, the difference between those with and without degrees is narrower (in Denmark or Iceland for example). 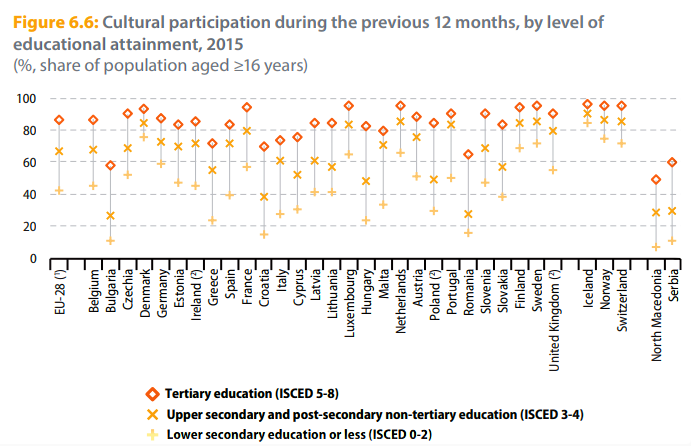 These sorts of connections have been made before (not least by TAA’s predecessor Audiences London about engagement in London) and the reasons are not difficult to understand. It is also 007.1’s observation that the Nordic countries have a much stronger emphasis on arts education from an early age and that this has a life-long effect on cultural participation.

There are plenty of other fascinating insights. For example, when looking at reasons given for not attending, proximity to cultural institutions is more often cited as a reason in larger countries than in smaller. It is also somewhat re-assuring to find that the country with the highest cinema attendance is France.

This does raise further questions about research at an international level.

Explore the free report for yourself

That’s it for the moment, 007.1 returns with more interesting findings next time. Let us know if you find anything good!

The International Agent is a quarterly newsletter focused on international arts, culture and heritage projects, as well as The Audience Agency projects. To receive updates on our latest work overseas, visit the sign up page.

Including...the new Data For workshop series, a checklist of the most common accessibility issues, and 'deepfakes'.

Including... tips to using Instagram Stories, a report on digital inclusion, and how to use collections for fundraising.

A quarterly roundup of interesting insights and useful resources, beyond The Audience Agency's own work, from Learning and Participation lead Lucie Fitton.

The Audience Agency, with partners Social Value UK and Mandy Barnett Associates, brought together representatives from over 40 cultural organisations to discuss how to measure social impact.