Working with Peterborough Presents to evaluate and evolve its Creative People and Places action research programme into an active model for social representation and creative change.

As part of the Creative People and Places action research programme, Peterborough Presents strives to engage Peterborough’s communities in co-creating, participating in and enjoying art that is fun, diverse and relevant to local residents. Since the programme’s inception in 2014, The Audience Agency has led evaluation of Peterborough Presents’ projects, taking an active formative approach that continues to evolve throughout the process. More than being simply about ‘proving’ the success of a programme, the evaluation has focused on encouraging the learning and development of the project itself. Daring to consider how your project could be better requires a courage and commitment that Peterborough Presents has brought to the evaluation process in abundance. This willingness has enabled The Audience Agency to work with the project’s staff, critical friend, associates and consortium to facilitate directional change that has yielded real success in achieving Peterborough Presents’ core aims.

As a Creative People and Places funded initiative, Peterborough Presents needed to be able to understand and demonstrate if and how its programmed activities were meeting its specific audience and participation aims and objectives. The Audience Agency was commissioned, alongside Culture Counts, to produce an evaluation methodology from the project’s inception, overseen by the Peterborough Presents consortium of leading stakeholders and requiring regular reporting and progress discussions. The consortium requested a mixed methodology evaluative approach, combining quantitative and qualitative elements to gain a rounded view of the project’s strengths and weaknesses in all areas. Crucially, Peterborough Presents also needed to be provided with practical interpretations and tangible ideas for further action, as research outputs alone can seem dry, dense and difficult to understand.

The crux of the evaluation included a range of different techniques:

The data collected was further analysed through mapping, Audience Spectrum and Mosaic and compared to other benchmarks, including the Peterborough population and other Creative People and Places projects.

The early parts of the project focused on relatively large-scale events that took place in the centre of town. Whilst these were successful in terms of attendance and appreciation, it was clear from the profiling that they weren’t attracting the target ‘low cultural engagers’, while mapping revealed audiences from certain artistically under-served areas of Peterborough to be completely absent. Importantly, qualitative research showed that parts of the community were deeply sceptical of activity that they saw as ‘tokenistic’ and not properly involving a wide range of people in its planning and organising stages.

Peterborough Presents’ own more in-depth consultation with groups in particular parts of the city, based on the ‘cold’ spots identified through the mapping, showed the city to be divided into distinct areas or districts, each with their own characteristics and communities. Research showed that residents typically look more to their own locality for entertainment, rather than regularly visiting the city centre.

Lively and informed discussion between this broad range of stakeholders, Peterborough Presents and The Audience Agency ultimately determined a new direction for the project, focused more distinctly on activity in these three (now four) districts. This revised strategy included a fresh approach to community commissioning of arts activity, involving more in-depth conversations with the public about what they would like to see and a broader prospectus of artistic possibilities. The transformation enabled a range of creative, inclusive and popular initiatives to evolve and flourish.

Thanks to the Peterborough Presents team's genuine commitment to reaching and engaging culturally underserved communities and determination not to accept superficial success, audience profiles changed dramatically for the better over the project's first three years. The four typically lowest engaged Audience Spectrum groups, which constitute 50% of Peterborough's population, went from making up 33% of Peterborough Presents audiences in 2015 to 58% in 2017: 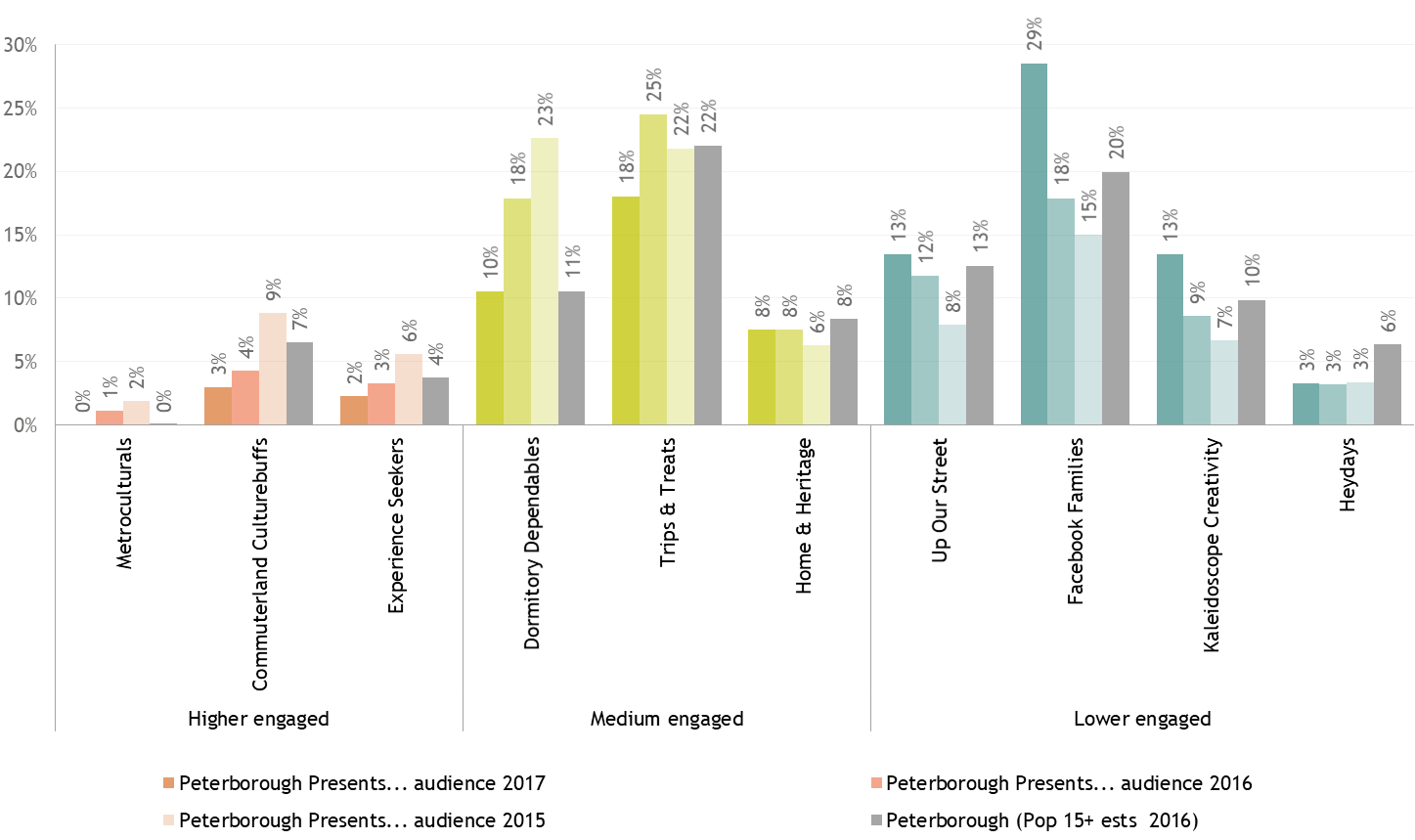 Moreover, continued mapping and profiling throughout the duration of the project visibly demonstrated how participation changed to be better aligned with what was intended, engaging increasingly different people in a wider range of areas within the city. This core principle of ‘double-loop learning’, by which assumptions are tested against evidence with the original aims being continually reassessed, continues now as Peterborough Presents advances into its second phase (2018-2020), with a range of new challenges to encounter and high hopes for the city's cultural future. Watch this place…

"In many ways the early part of the project looked like a ‘success’. There were lots of attenders who were appreciating the events but it was clear that we were not achieving our original aims. The participants were not those who we needed to engage and there was a lack of community involvement in the work. Evaluation and discussion helped us to understand why this was and to put practices in place to change it. The Audience Agency’s work didn't just change our audience breakdown, rather it completely transformed every element of the programme and we are now going from strength to strength."