Feature | Falling in love with data

The process of decision-making should include hard evidence, so why do some arts workers seem determined to avoid the data that provides it, asks Patrick Towell.
7 June 2018 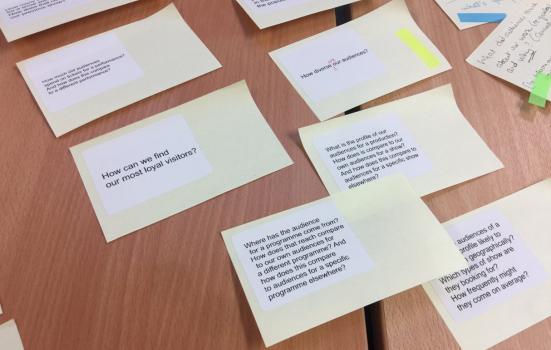 Evidence-based decision-making is an idea growing in recognition in business management, medicine and other fields, all backed up by a plethora of books and research. It hadn’t occurred to me before that decision-making might not take evidence into account, especially in the rather scary case of medicine.

But on reflection, there are many reasons to decide and prioritise in other ways. You can have a hunch, like my mentor who used to say “trust your gut”, or hierarchies and strength of personality can mean the HIPPO (the highest paid person in the office) chooses according to their interests and preferences. And then we all know those that ‘do it this way because we always have’ or those at the top of artistically and mission-led organisations who just think they know what’s best.

However, many different winds of change are prompting those of us running creative enterprises, including cultural organisations that are non-profits or within public bodies, to look again at how we make decisions based on facts (as well as our instincts and untested opinions).

Money is tighter, both from funding and earned revenue. To me, the mutually reinforcing drivers of changed consumer expectations and new technologies are even more significant. They are together revolutionising every category in which arts and culture operate – leisure, tourism, entertainment, hospitality, publishing, live events, content and learning.

At the same time, arts organisations are expected to deliver and provide evidence in many areas: to have more impact for funding bids, to be more efficient especially in green ways, to be more inclusive and diverse, and to expand their work and engagement with people across digital platforms. Even writing all that is exhausting, let alone doing it.

To respond to these challenges and opportunities, we have to run an even tighter ship. It was with this in mind that Golant Media Ventures* and The Audience Agency dreamed up the ‘Services for Data Haters’ project. We posed ourselves the questions: How do people in the cultural sector use evidence in their working lives? How could they do it better? Why would they? What gets in the way?

The focus of the project was how people can use the evidence of data and information from research or elsewhere to run cultural organisations more effectively. The idea is that evidence can point to what is true about other people and the world (facts) and help test theories and assumptions about how an organisation interacts with them.

Fortunately Innovate UK had a call-out under its Design Foundations strand for early-stage, human-centred design projects to create new product or service ideas. For those of you not familiar with it, Innovate UK is the UK’s Innovation Agency, part of UK Research and Innovation alongside all the academic research councils.

The survey we ran had just under 600 responses from people in a mix of roles from across the arts, culture and heritage sectors. Some of those respondents work in an organisational culture that doesn’t embrace the use of data: “Data gets bad PR. The greatest barrier to usage is lack of fluency and comfort with data as a medium to tell stories.” For others it was systems being difficult to access and join up: “We can’t effectively understand or engage with our audience without tools to collate, analyse and use our audience data.”

Lack of time, resources, knowledge and skills were other barriers that were cited. Contrary to our original assumptions, only 11% of respondents could be really classed as ‘data-haters’.

The survey and workshops showed that most people saw real opportunities in better using data. This could be in strategy and business planning: “We could use this data to make better informed business decisions… and develop new and exciting initiatives to secure the organisation’s future.”

Interestingly, many did consider its use in artistic and cultural programming: “Data could be used to inform our programming schedule, driving more revenue.” Audience development was an area where people saw a clear benefit: “Our visitor and sales forecasting is based in fairyland – better datasets and data analysis could be more realistic.” People also thought they could better justify the use of public money through more defensible evidence.

Exploring this in workshops gave us the big realisation. What people needed was help working out what questions they needed to ask. They did not need more data, or more analytics, or more tools, although these might be nice. They first and foremost wanted to know what kind of questions they could ask – on which they could then base decisions.

They also had surprisingly consistent ideas about the purposes of these questions: describing and better understanding audiences; estimating the potential market for something and comparing this to actual figures afterwards; and reviewing organisational performance and identifying ways to improve it. Then one of the participants gave us an idea: “You want the answer as you’re working on the thing. You almost want a little box that pops up.”

So we prototyped a chatbot that talks you through what you might want to know – a kind of Alexa for cultural managers. People’s reactions were enthusiastic. “If this can drive engagement with understanding of what audiences do and how they behave, it could be quite transformative,” said one leader. Others thought it could help those with less data manipulation and analysis skills: “If the tool could sit over your data and you could do everything in one place, that would make data accessible to more people.”

We are planning our next steps in response to these findings. As well as enhancing The Audience Agency’s existing tools, we believe there’s a chance to provide a whole new kind of ‘e-help’ for data generally. Maybe the toughest job is to work out what they should be called.

This article, sponsored and contributed by The Audience Agency, is part of a series sharing insights into the audiences for arts and culture.