The profiles, behaviours and motivations of audiences who attend arts, culture and heritage in the peak summer months are distinct and strikingly aligned with how people engage over the festive period.

Why People Attend in the Summer

Summer, particularly August, is different. This is the only month where the most frequent main motivation switches, to ‘spend time with friends and family’ (20%), ahead of ‘to be entertained’ (17%). ‘[Artform] is an important part of who I am’ also drops (to 9%), but ‘to entertain my children’ and ‘to educate/stimulate my children’ both rise (from 4% to 7% and 3% to 6%).

Cultural attendance is August, then, is more about other people (spending time with them, or providing them with stimulation/enjoyment) and less about ourselves (our own enjoyment, or sense of self).

Incidentally, the other notably different month is December. This follows a similar pattern to August, except that ‘to be entertained’ is as high as usual (not lower) and ‘for a special occasion’ rises to greater prominence (7%, cf. 4% overall), with ‘educate/stimulate my children’ lower. There is a stronger emphasis on fun at Christmas, along with spending time with others. Motivations are a little more concentrated, too: 69% coming from the top 5 motivations (cf. 64% overall and only 60% in August). 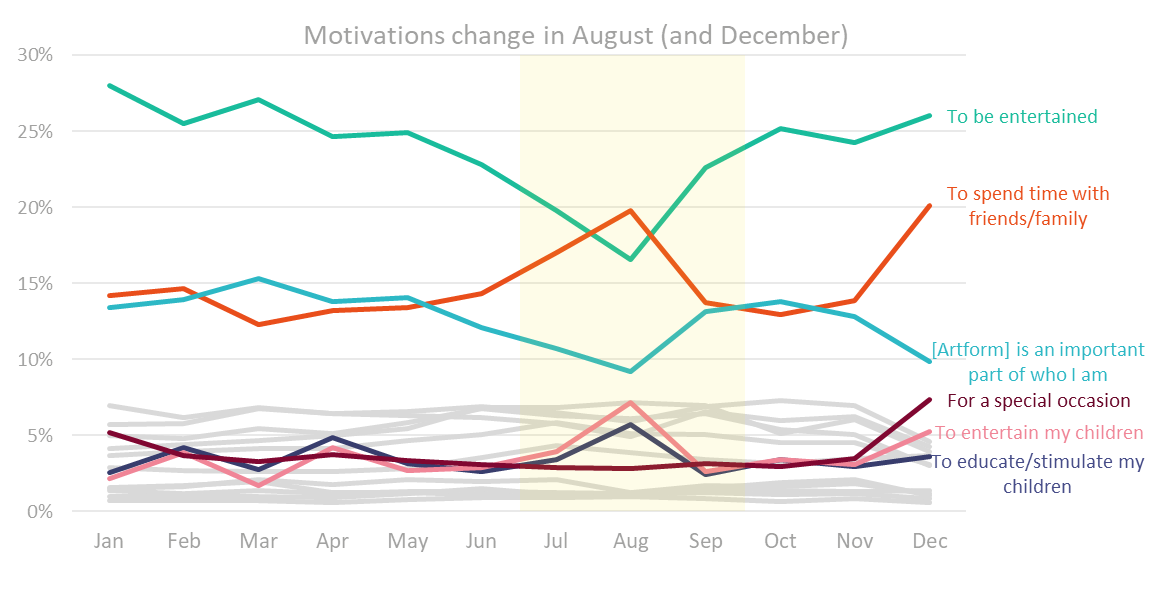 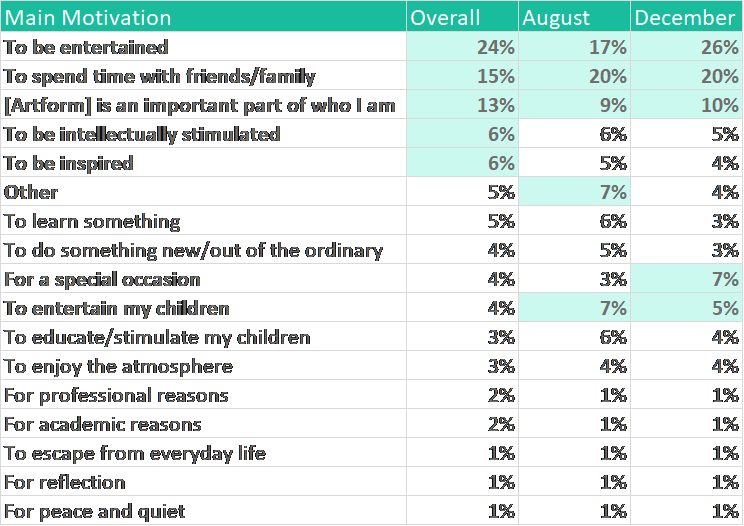 Shifts in motivation through the year reflect shifts within activity types, as well as shifts in the proportions of activity types at different times of the year. Many types of activity follow the overall pattern throughout the year, with dips in ‘[Artform] is an important part of who I am’ and desire ‘to be entertained’ in Summer, and rises in ‘spending time with friends and family and child-related motivations [whether to educate or entertain them].

There were, however, exceptions. Focusing on a few types of activity as examples:

Who Attends in the Summer

Summer visitors are almost twice as likely to be first time visitors, with the number of lapsed visitors [i.e. those who have attended before, but not in the past 12 months] remaining fairly constant throughout the year1: 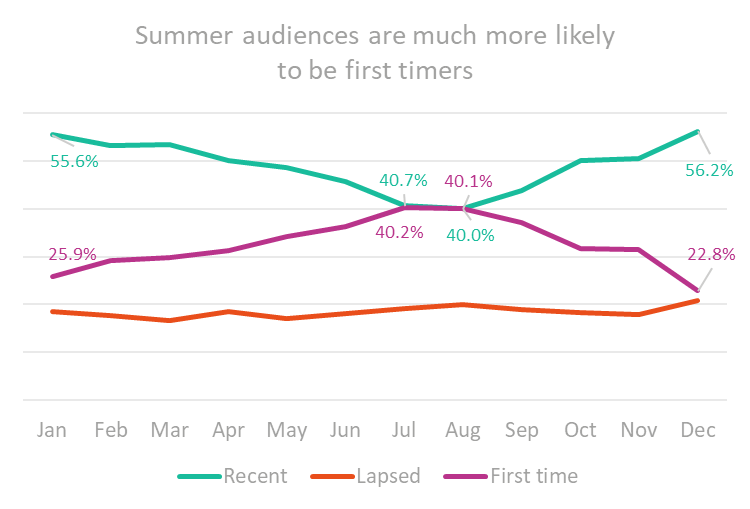 Most types of activity follow this pattern, with a peak of first time visitors in August, although Musical Theatre and Plays/Drama peak slightly later (in September), whereas a couple of art forms see the peak in April to June, such as Traditional Visual Arts and Dance (with Plays/Drama and Contemporary Visual Arts peaking around July).

Summer groups are also larger (with a lower proportion of single visitors or visitors in couples)…: 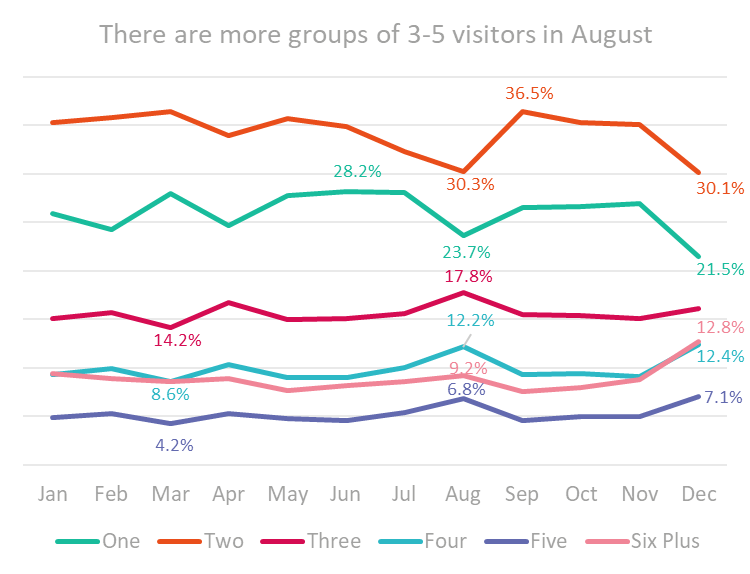 However Music has a higher proportion of solo attenders in August than other months (39% compared to 23% for the year on average), as does Plays/Drama (32% compared to 21%).

Summer audiences are more likely to contain multiple adults as well as children, as the following summary of who visitors attended with shows: 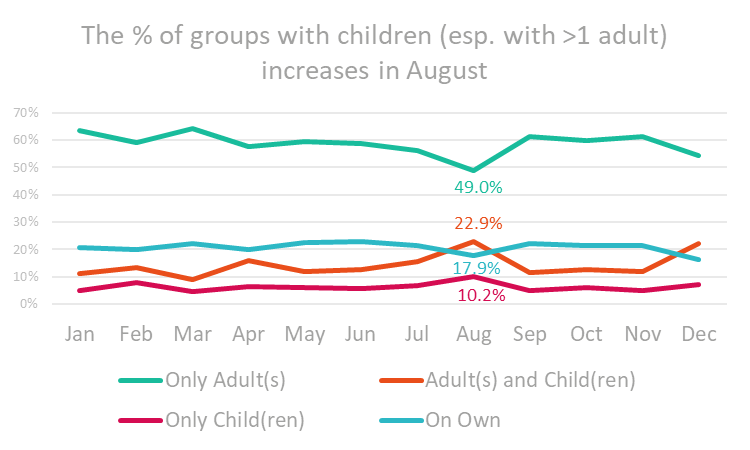 Similarly, August audiences are more likely to be 35-44 (i.e. the peak age for children in the household) and less likely to be 65+, compared to the rest of the year (although there are still more of the latter than the former in absolute terms): 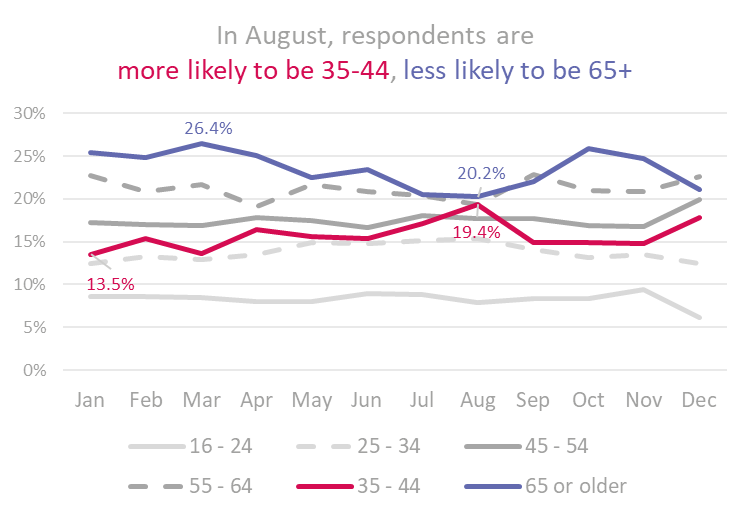 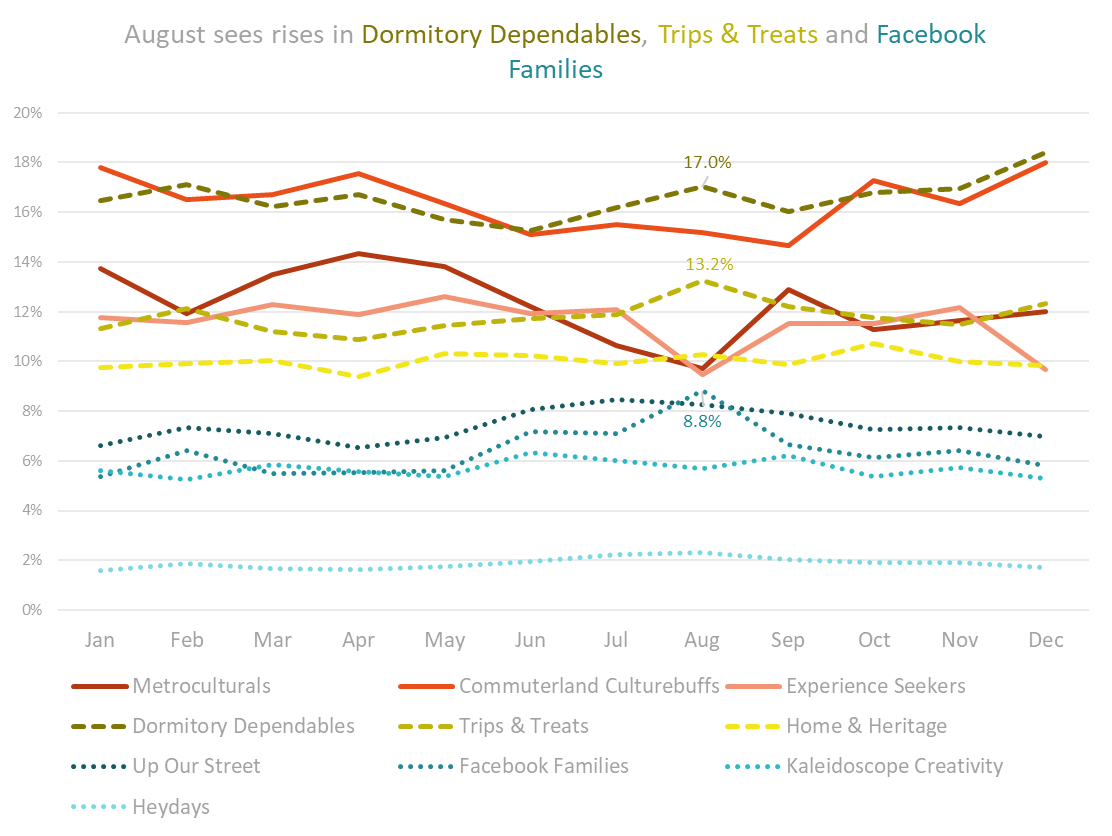 Respondents are also more likely to be from overseas in the Summer, although more in July than August. The following chart shows the proportion of respondents who were from outside the UK in each month, with proportions double in July compared to February: 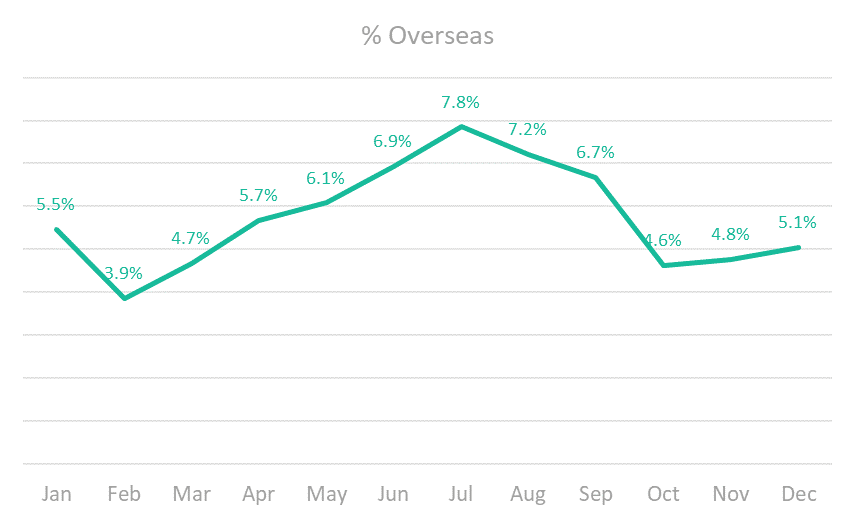 Domestic attenders are also more likely to have travelled further in late Summer, peaking in September (the following chart is based on the distance travelled based on the postcode of respondents relative to the venue attended): 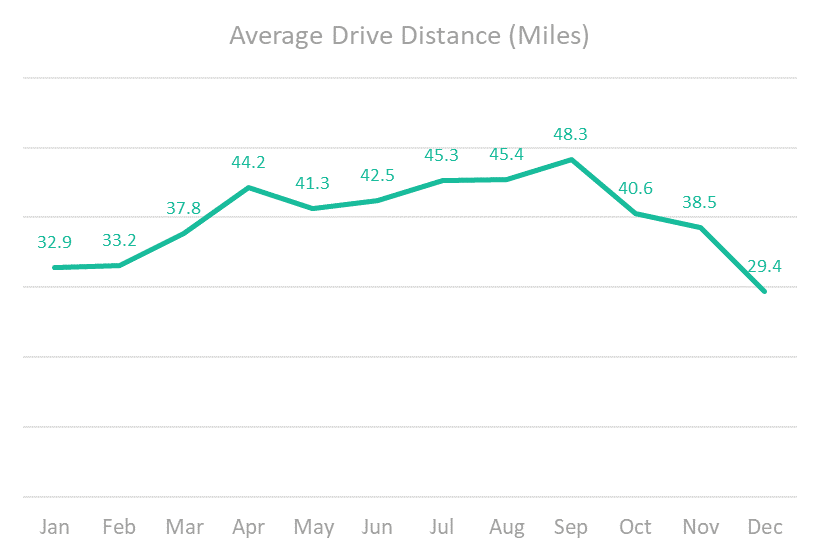 This is largely due to changes in the proportion of the most and least local audiences, rather than an overall dilation of the distances travelled, as is evident when looking at the change in proportion by drive time bands: 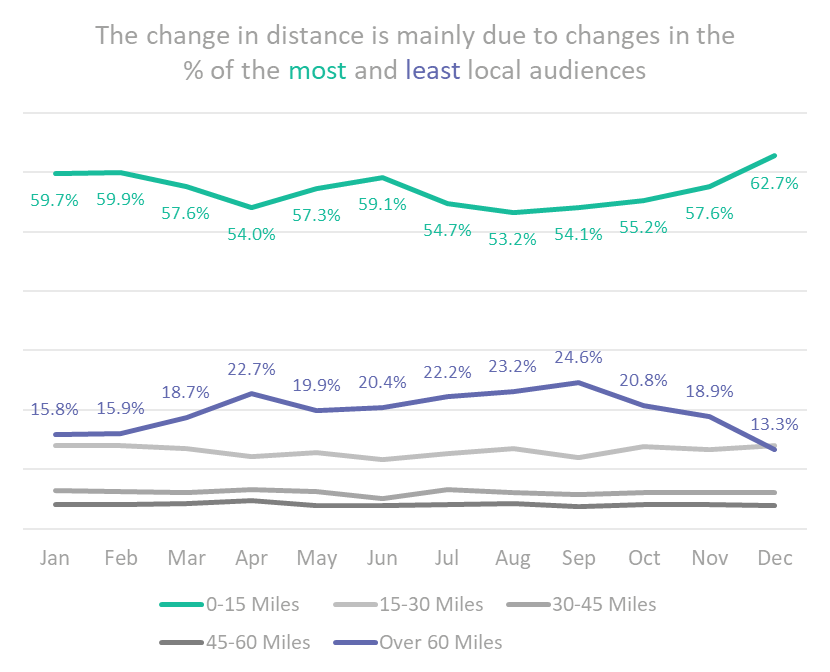 What about Outdoor Arts

From the Cultural Participation Monitor (a representative survey of the UK population carried out in waves through the pandemic), we can see more about public engagement with Outdoor Arts. 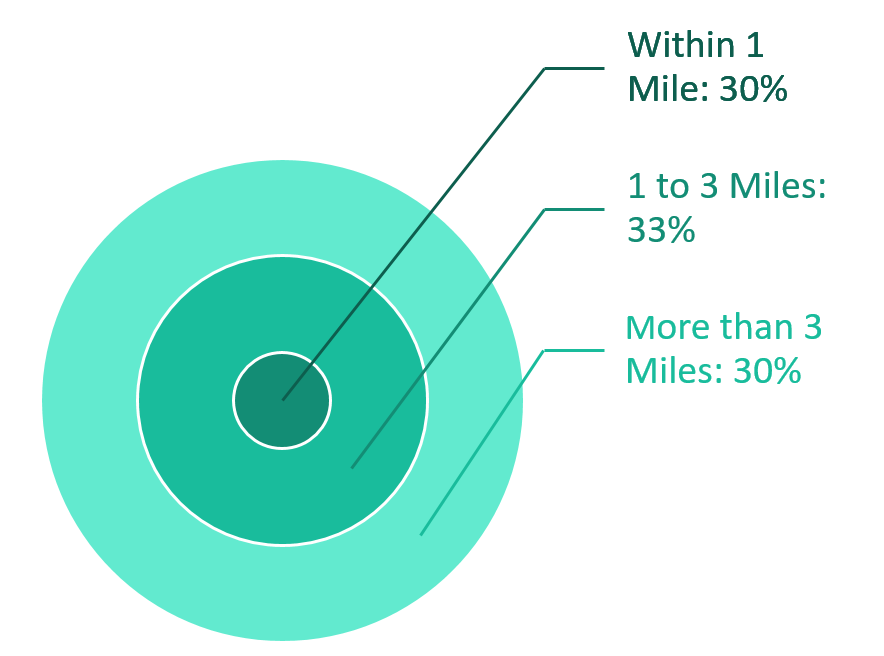 Of these, 30% of attendances were within a mile, 33% within one to three miles and 30% from further afield (with 7% ‘not sure’), indicating a very local audience (for contrast, the equivalent figures for performing arts events were 18%, 40%, 38% and 6%). 98% of respondents from the Audience Finder surveys also indicate that they are from the UK, rather than overseas.

The choice of who to attend with also stayed close to home, with ‘other adults I live with’ the group attended with by most people.

The type of group attended with as a proportion of visits can be seen from the Audience Finder surveys: 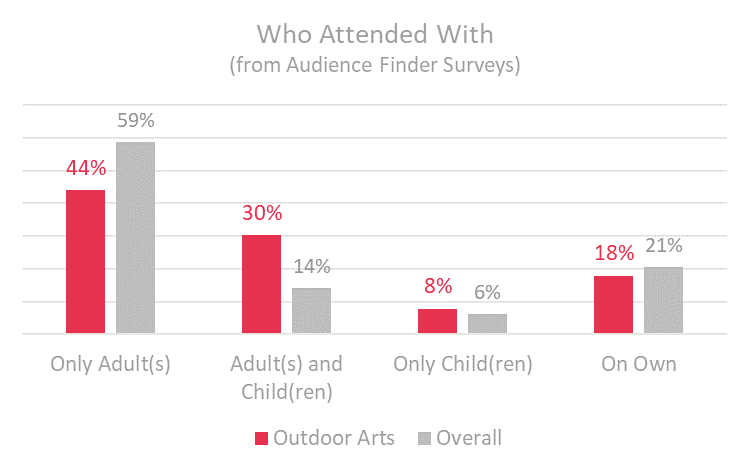 The most notable difference was the increase in the proportion of visits with children, particularly as part of a group including other adults (who, as we can see from the previous figures, are much more likely to be adults from the same household). Combining date from these two sources gives a more rounded view of who people ever, or typically, attend with. 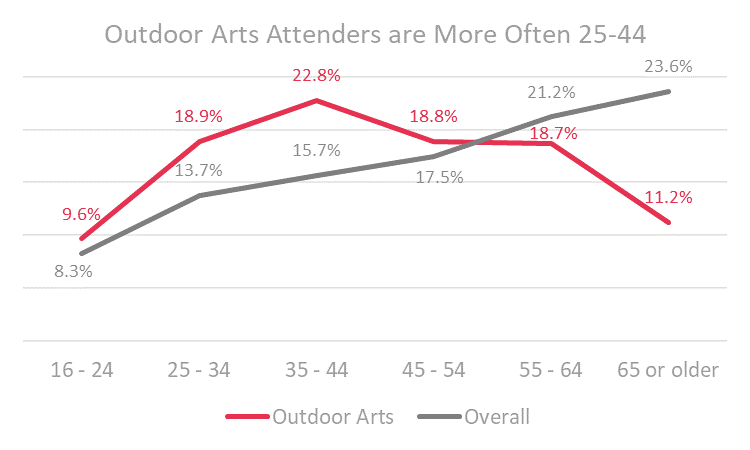 Outdoor arts has a higher proportion of first time visitors than overall, at nearly a half, rather than a third, showing how it reaches beyond currently-engaged audiences: 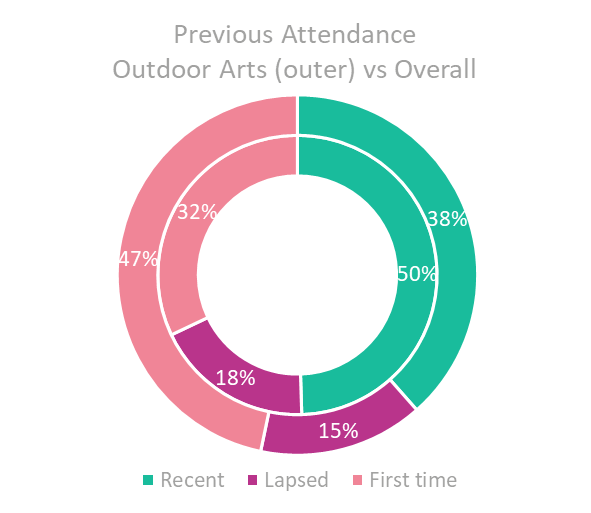 This is linked to Outdoor Arts also reaching a more representative audience profile than other arts and culture (as included in Audience Finder); indeed, it has a higher proportion than the UK population for some typically lower-engaged groups:

Most people attend Outdoor Arts to spend time with friends and family, for entertainment, to enjoy the atmosphere, or to do something new/out of the ordinary, accounting for 62% of respondents between them: 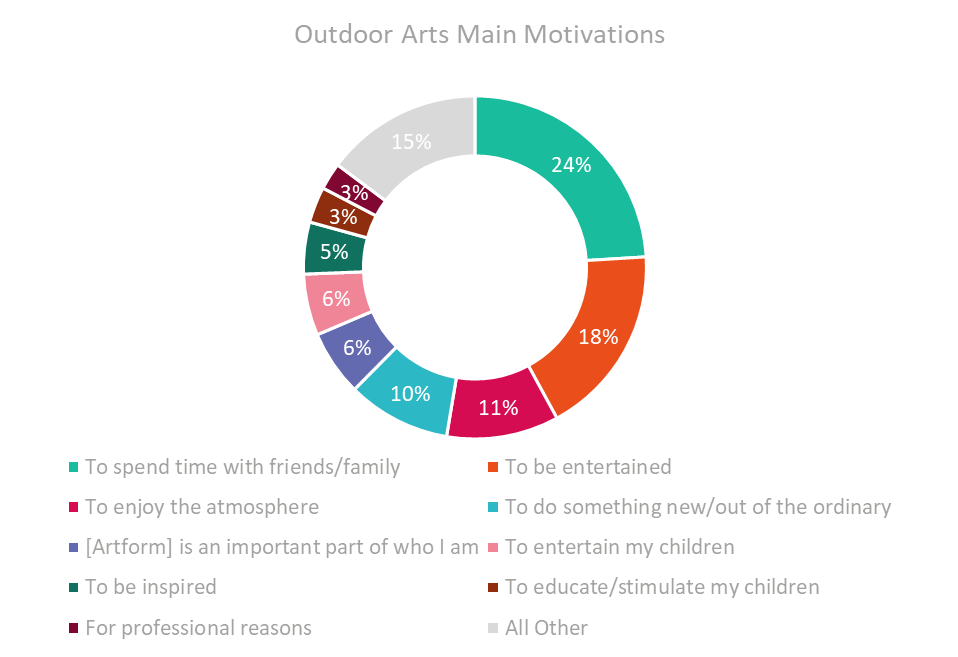 The top two ratings for Outdoor Arts match those for August overall, but there is a stronger emphasis on novelty and atmosphere (interesting, for August itself, Outdoor Arts reports equally high proportions mainly motivated by those top two reasons, showing a move towards entertainment as a motivation in that month, rather than away from it, as happens overall).

Satisfaction with Outdoor Arts events was high, with almost no negative ratings of the overall experience. 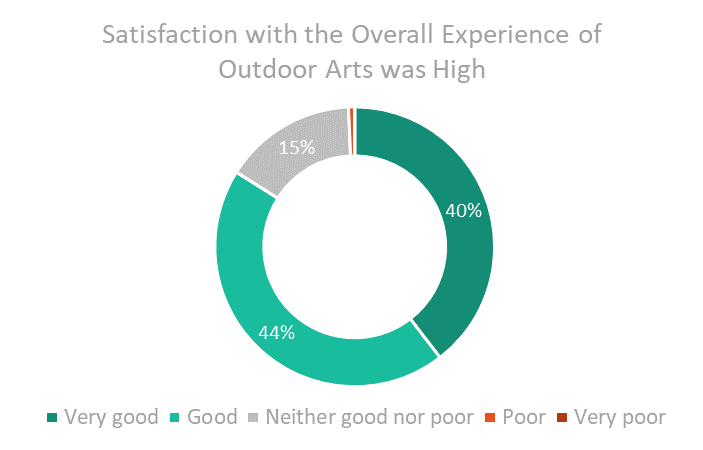 Respondents, who had attended Outdoor Arts events in the pandemic were similarly positive about COVID safety measures. 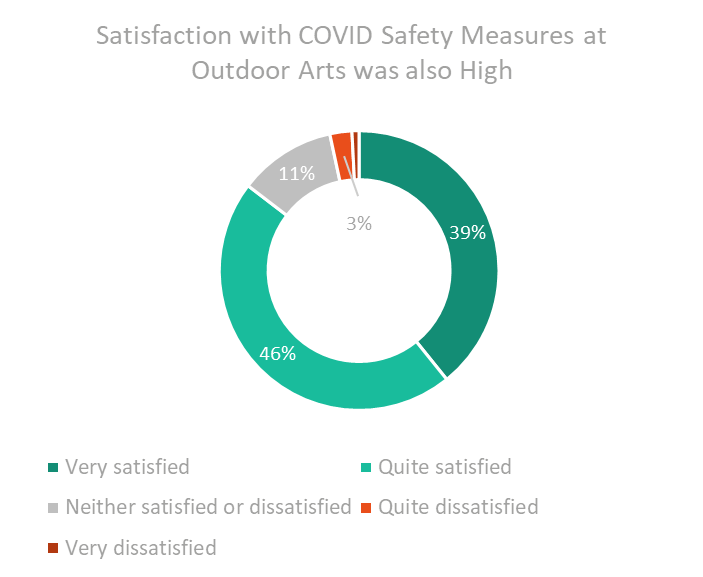 What this all means

In Summer, expect visitors to be:

Summer audiences are also similar in many ways to Christmas audiences (in terms of larger group sizes, more family groups, motivations etc). There is potential to:

Outdoor arts audiences are particularly likely to first timers, or from a broader profile of visitors, as well as attending in family groups, so may of the same suggestions apply. See these tips for more outdoor inspiration: https://theaudienceagency.org/bounce-forwards-evidence-hub-2/sector-evidence-artforms/venues-outdoor-arts/outdoor-inspiration

Do remember, though, that not all art forms or activity types are the same in the summer (for example Music audiences party sizes become smaller, with no diminution of ‘entertainment’ as a motivation. There will also be variations for particular places and individual organisations. While it’s useful to know the big picture, it’s also important to know the localised and individual context. You can use your own Audience Finder survey responses, or profiling of audience postcodes, to get insights that you can compare this way.