Between the end of the first lockdown and the start of the second, many cultural organisations opened for in-person visits or performances.

This report summarises audience spectrum profiling and distance travelled for some of those audiences, to give an insight into different types’ attendance, travel patterns and potential future behaviour.

This profiling provides evidence that:

The distance analysis shows that:

These could be for a range of reasons, e.g.:

Read on to understand our findings more fully...

What we found | Profile

Compared with the equivalent period in 2019, there were:

This is likely to reflect a combination of:

Broken down by artform: 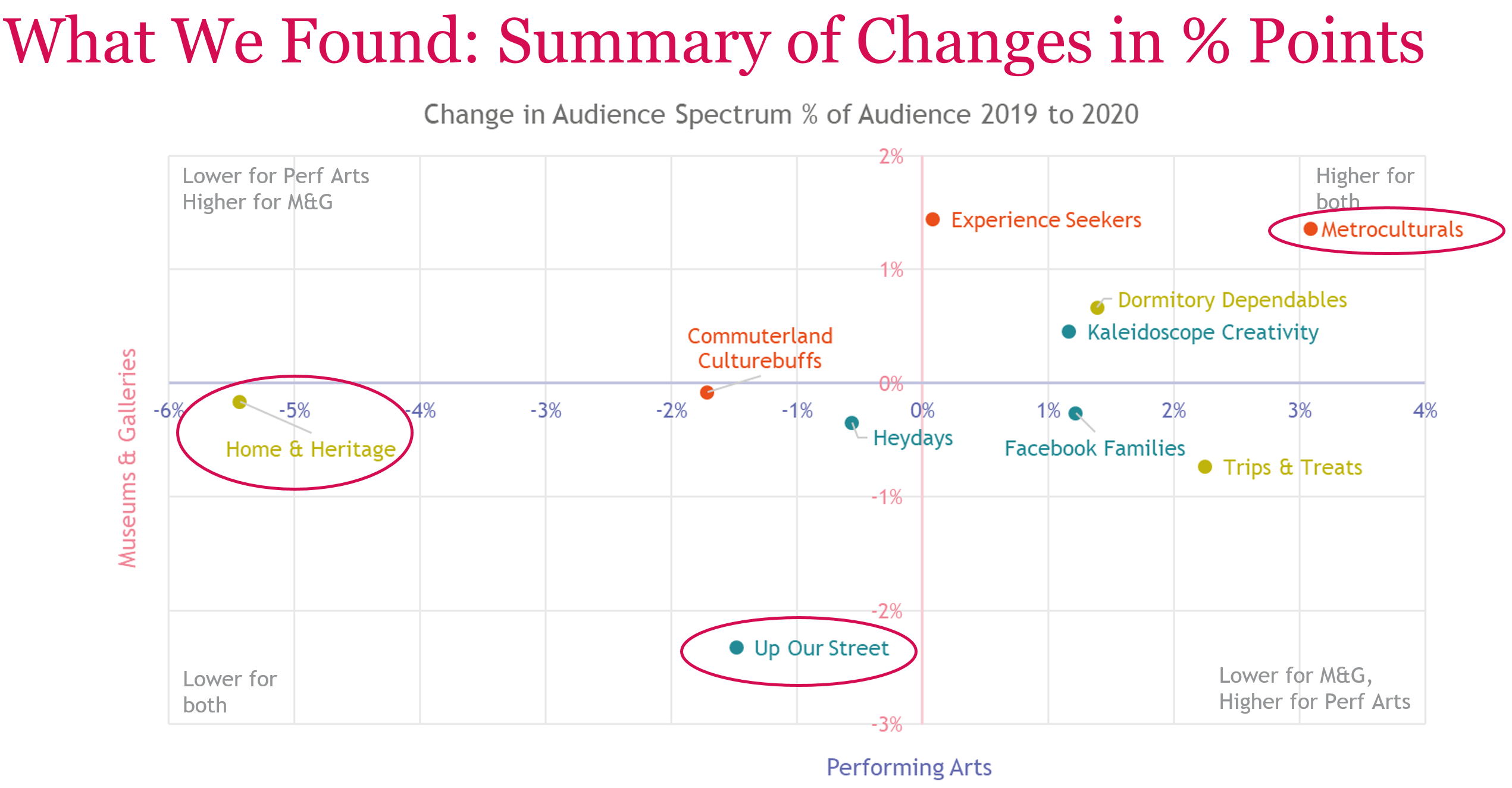 Higher proportional attendance for both Performing Arts (PA) and Museums and Galleries (M&G):

Lower proportional attendance for both PA and M&G:

Lower for M&G but higher for PA:

Lower for PA but higher for M&G:

These profiles show proportions, not absolute numbers (although we show this absolute decline for performing arts later).

Some segments have reduced by more than average, and are of particular note (especially where, like Commuterland Culturebuffs, they are a significant part of many cultural audiences).

For the Performing Arts data, we looked at total booker numbers for each time period. This chart shows the % decrease in the total number of bookers for each segment*. 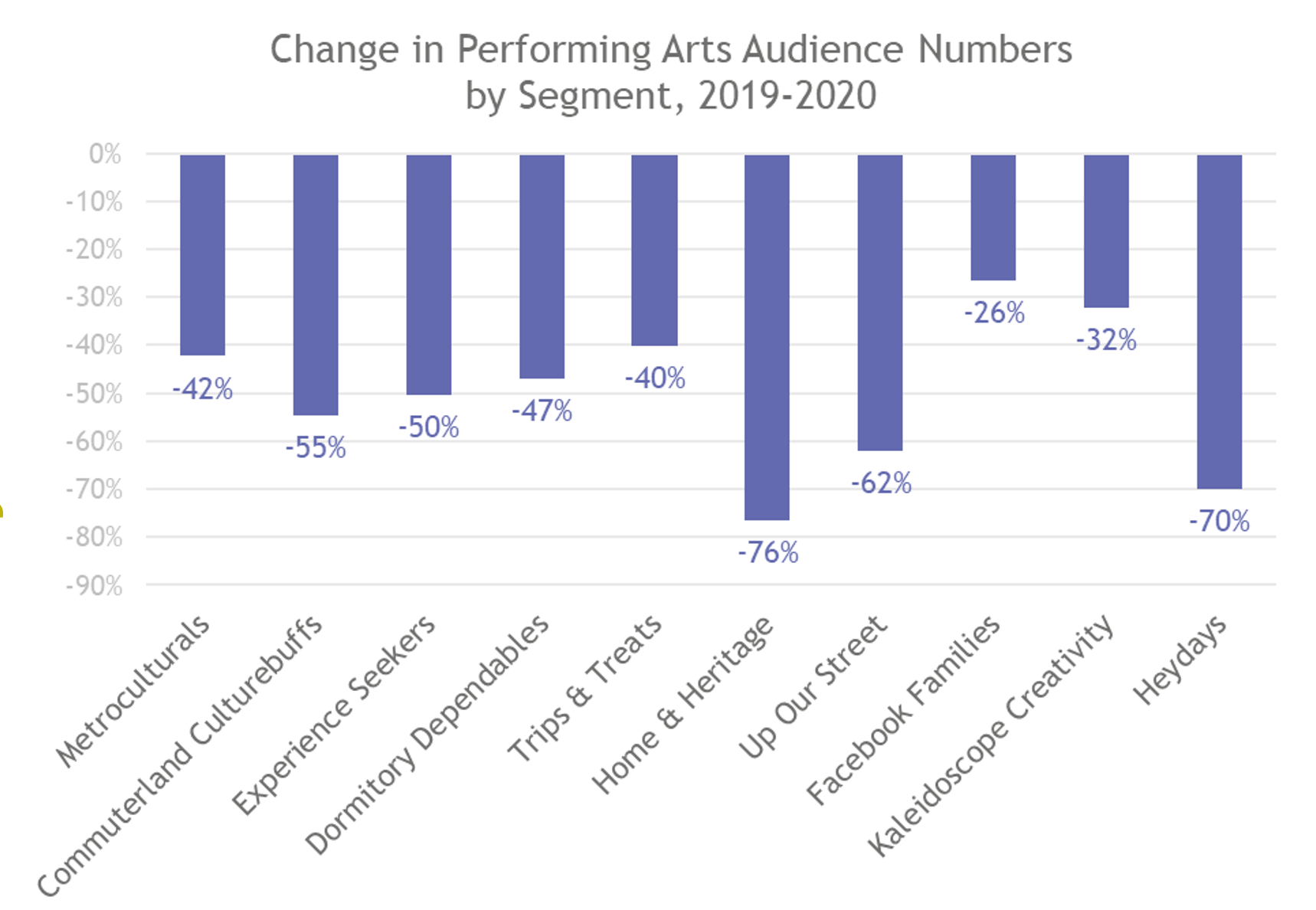 It shows biggest decreases in Home & Heritage, Heydays, and Up Our Street.

*since we profiled a selection of venues which had reopened, overall sector reductions are higher than those shown.

An alternative view is to look at the profile of those performing arts venue audiences who didn’t attend in 2020, compared to 2019*. 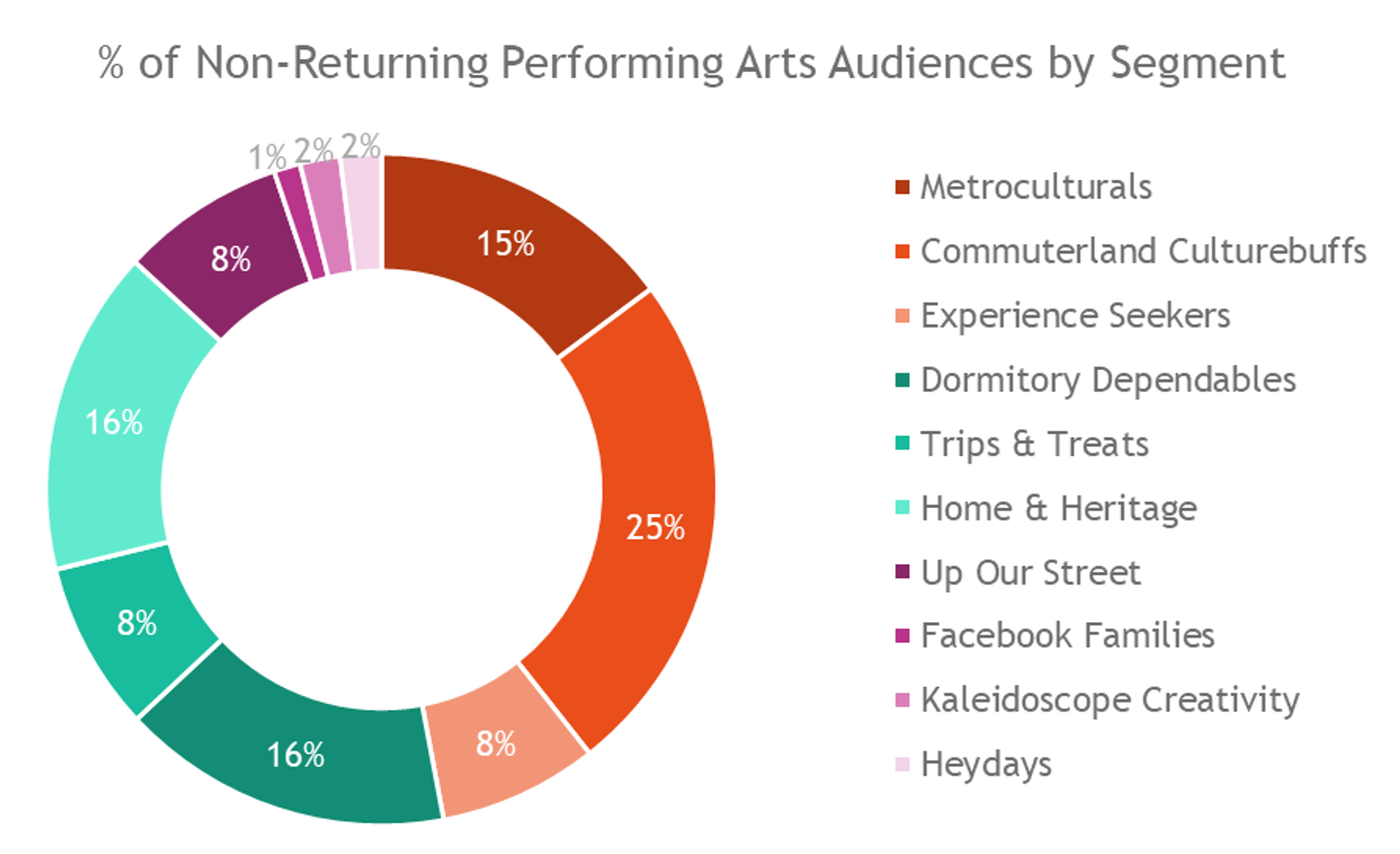 This really highlights the importance of the drop in Commuterland Culturebuffs: 25% of the total non-returners.

What we found | Distance

We looked at the change in distance by plotting the distance between organisations and attenders, grouped into standard bands. This was done three ways (to ensure the specific method of defining distance wasn’t the cause of any observed difference):

All gave the same overall result. 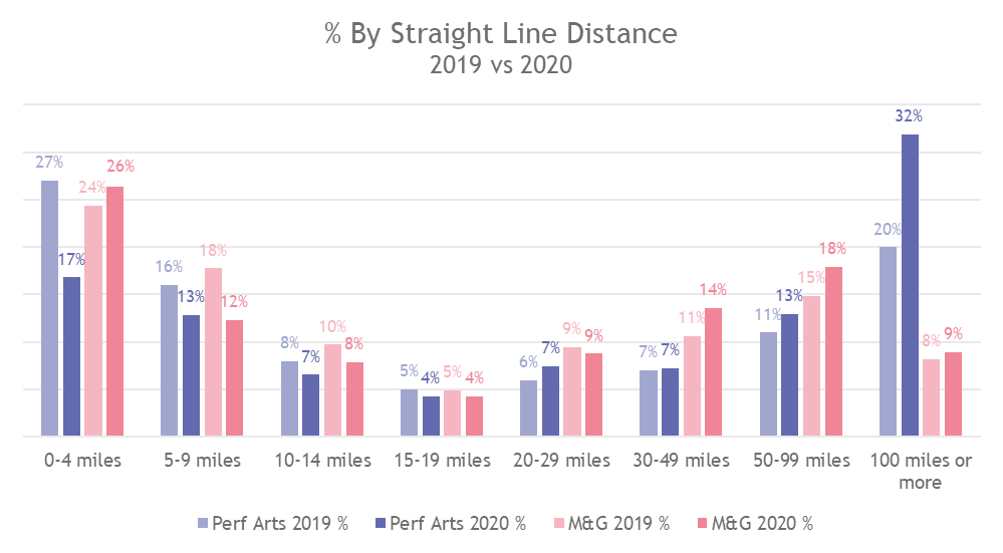 Between lockdowns, performing arts proportions reduced for all distances below 20 miles (esp. the most local) and increasing for further away, with 100+ miles rising to 32%.

Museum and Gallery audiences increased within 0-4 and beyond 30 miles away, but by lesser amounts. 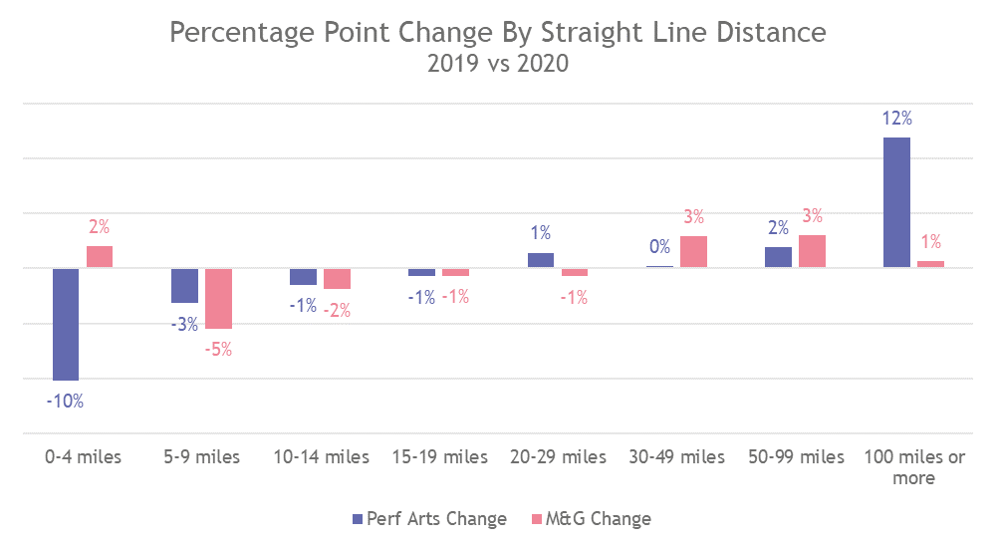 The overall picture is the same for drive distance (although the audience appears further away, since the average distance by road is always longer than the straight line distance). 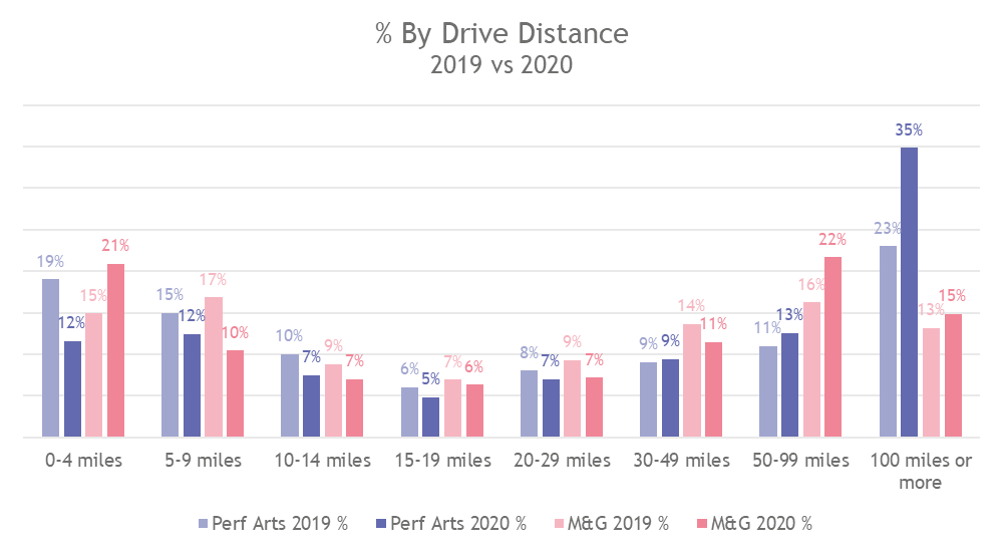 This shows decreases for performing arts within 45 minutes, but most increase over 2 hours. For museums and galleries, there is an increase within 15 mins, then decreases up to 1.5 hours away. 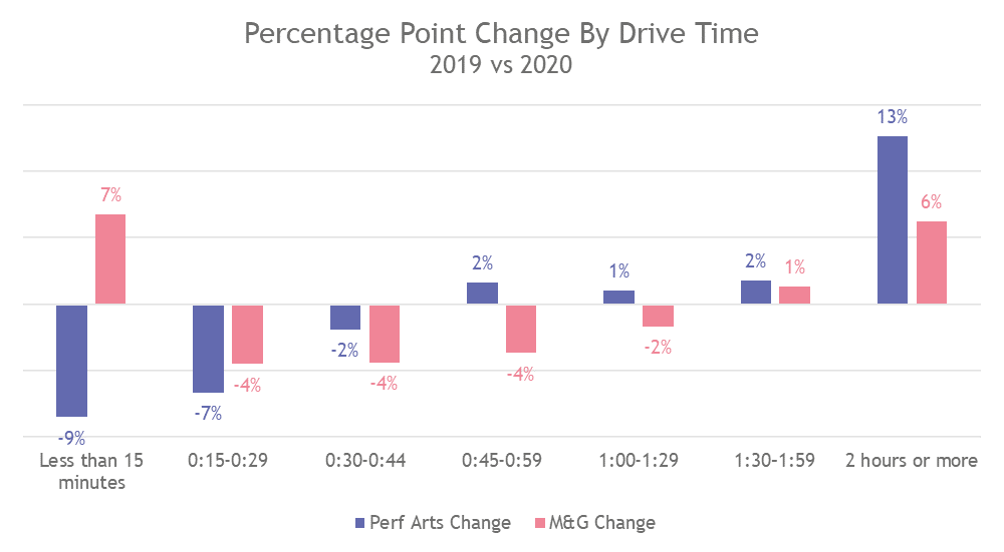 Notes about the research 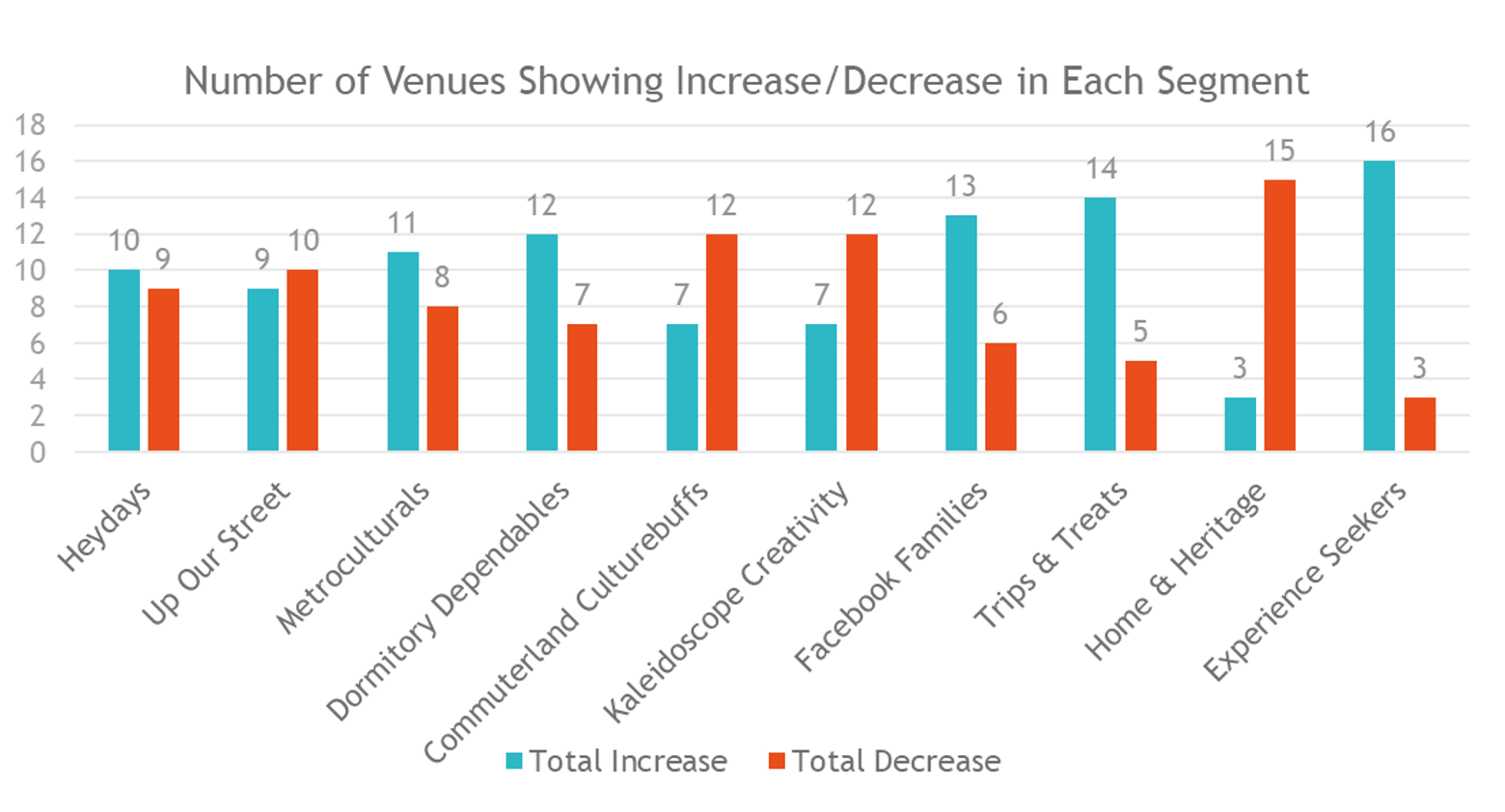 This profiling gives an insight into which audiences have been more reluctant to return in this interim period, but we should be cautious to generalise, because:

However, evidence from our Population Monitor should enrich our understanding shortly.

If you're interested to hear more about this research, get in touch with oliver.mantell@theaudienceagency.org

Without active intervention, audiences are likely to shift away from traditional tastes a little, towards more varied and contemporary tastes, as the balance of segments adjusts in response to COVID-19. Differences of cost and space/ease of circulation (e.g. between performing arts and museums & galleries, but also in terms of formats) are likely to affect which segments engage, potentially accentuating differences between sectors/formats. Some lower engaged groups will become harder than ever to reach for existing programmes (e.g. Up Our Street and Heydays) and additional audience development efforts and/or programming changes may be necessary to reach them in future. There is a possibility of arts audiences becoming further concentrated among highly-educated, metropolitan populations, without further efforts to diversify reach.