More about Trips and Treats

With above average attendance at museums, galleries and particularly heritage sites, cultural engagement of some sort is part of their lives. Given that access to provision can be relatively low, considering where some of this group lives, they are more active than might be expected with some making planned efforts to attend.

Live music, musicals, film, pantomime, circus, carnival, plays/drama, museums, galleries and street arts feature most highly in their choices. Around half have attended museums, galleries or heritage sites in the last 12 months. This suggests that family outings, including for special occasions, are reasonably frequent. 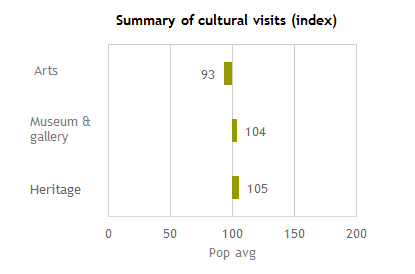 Trips & Treats’ leisure pursuits are varied and relatively important for this group, reflecting busy family lives. They are sporty, undertaking activities such as team sports and dance for fitness. At the younger end they are also regular attenders of football matches. Of all the segments they are the keenest shoppers and do this with the family as part of their leisure time.

At home there is a focus on in-house entertainment – computer games and consoles being popular. TV viewing takes advantage of Sky+ or Virgin Media channels and on demand options. For the homeowners in the group there is interest in some DIY and gardening.

Days out, and going to restaurants and bars are not uncommon as opportunities to hang out with family and friends are important. Choice of restaurants are likely to include familiar known brands and chains such as Frankie & Bennys, Pizza Hut, Nandos and TGI Fridays. 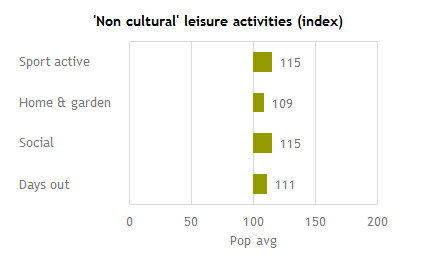 Suburban adults and families living across the UK on the edge of major conurbations, towns and cities. 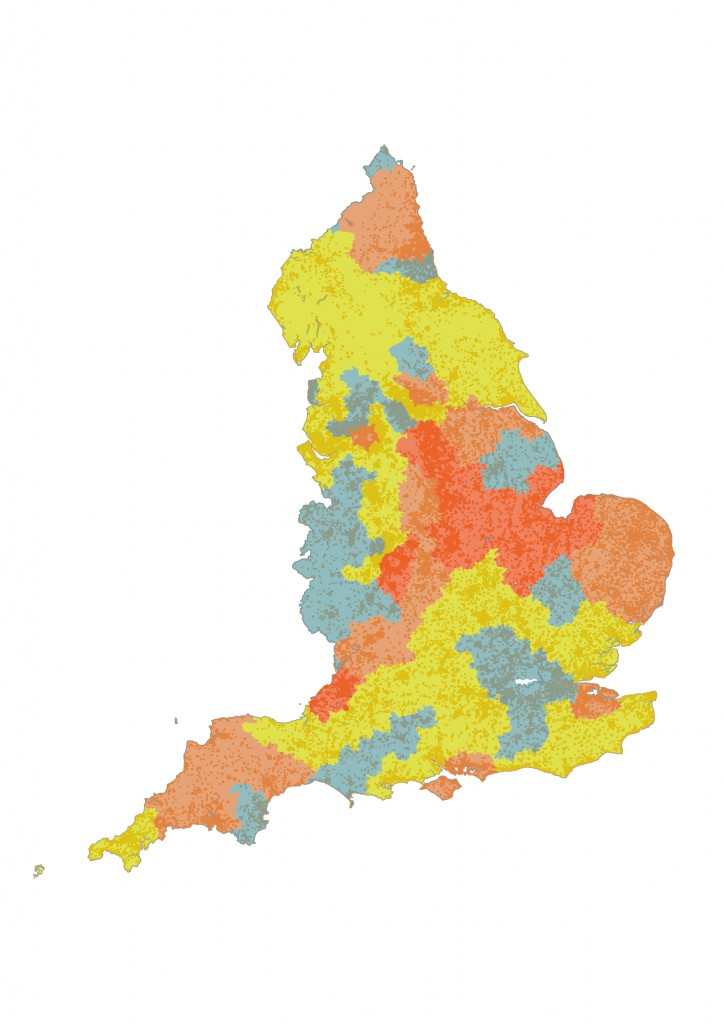 Trips & Treats are likely to be fairly active participants for arts and culture and pursue activities such as practising circus skills, painting, drawing, creating original artworks computer animation and participating in carnival more than the average.

Many are also involved in craft, photography and playing a musical instrument. As busy families these activities to a certain extent may revolve around the children, but are led by parents who believe that creative participation is important and possibly educational.

With an average level of education for the population, this group are mostly employed in mid-level professions or lower management, with some in supervisory roles in highly skilled trades (having undertaken apprenticeships).

Their salaries while not high, offer them a comfortable standard of living in the main. Some are still paying off mortgages so have higher outgoings, others have paid them off (but may still be supporting older children in one way or another).

Use of websites such as Ebay and Amazon and shopping at out of town superstores such as Aldi, Asda, Tesco or Cash and Carry where they are likely to use vouchers, coupons, collect reward points and make the most of discounts and meal deals helps control their spending. They are also likely to have a car, or possibly a van which enables access to a greater level of provision given their suburban location.

Much prefer contact by email than phone or in person.

Technically savvy, but not always seeking out the latest gadgets, Trips & Treats contains families which are regular users of the internet. Those who are younger are keen social networkers and adept at managing their money online. All are using websites to research and seek out information on a daily basis.

They use social media to find out what’s going on locally and to chat about activities and other cultural events, but not necessarily for following cultural organisations. They are likely to use the full range of platforms depending on what they’re doing – Facebook, Twitter, YouTube, Pinterest. Many own smartphones and download a large number of apps. Downloading or streaming music using Spotify is also common.

They much prefer contact by email than phone or in person.

Mainly tabloid readers, Trips & Treats are likely to read The Sun and The Daily Mail, along with a local daily newspaper. A few will read a broadsheet. They are most likely to respond to messages received by email bulletins, or those seen on the television and read about in magazines. However, their primary source of information is family and friends, whose opinions they trust to help them make decisions. Depending on how confident they are feeling some may take a few risks, but invariably they go with what they know or seek to lower the possibility of risk by drawing on a range of easy to access information sources.

21% have volunteered in the last 12 months

They believe culture does make some difference to their localities and people’s lives and that access to it is therefore important. Less than a quarter do some volunteering – mostly for arts and sports – which is at a lower rate than the national average. Much of this may be associated with or aligned to family interests.

If Trips & Treats consider the local arts offer worth supporting, they are moderately likely to have donated, but mostly give to museums, galleries or heritage, with 32% having donated between £20 and £99. The higher value donations going to arts and heritage and lower levels to museums and galleries. 10% of this group are members of The National Trust.

15% to Museums and galleries

Found equally throughout the country (except London), Trips & Treats live in mostly semi-detached or terraced houses located in the suburban outer edges of cities and towns.

86% of this group own their homes with older members having lived in their local area for long periods of time, close by or near to other family and relatives and are established in their communities.

50% are households with children and most live in what are essentially family homes where older children may have either left, are frequently coming and going, or still resident (which places a certain amount of pressure on their parent’s finances). Many have younger families and most have at least one or two children, although there may also be other adults living in the household, such as older relatives. 22% are singles, either living on their own or co-habiting, while some are younger couples just starting out.

This group is fairly identifiable in any region from the type of housing they occupy. While spanning a range of ages, they are similar in lifestyle whether they are aspiring families or well established with older children. Most likely to be English, Western/Eastern European there is a higher than average number of Bangladeshi families included here. 19% of this group have long-standing or limiting disabilities or infirmities.

Trips & Treats are already as active as they might be in cultural and other leisure activities, so the challenge is to support their interest within a familiar offer whilst also encouraging them to broaden or deepen their engagement beyond the obvious.

They are receptive to advertising and direct marketing messages, but need endorsement from friends and family – as they do not have the time or perhaps the inclination to seek out new or different opportunities from the known. Led by their children’s interests, depending on their age, a good family friendly offer or accessible work offering a guaranteed family day or night out is what they are seeking. As they will invariably have to travel from the edges of town, thought should also be put into advice on transport, parking and appropriate food and drink options.

Annual events such as pantomime, carnival or circus and street arts will engage them, alongside branded shows, live bands or blockbuster exhibitions. At a local level it may be possible to support them with a more ‘risky’ or unexpected offer, but this will involve a certain amount of hand-holding – which may be effective through an initially participative route.

At a local level connections with local community groups may be effective etc. Links with groups supporting families such as children’s centres, family activities in libraries or local scouts and guide centres. Schools will be key partners to seek out and support, along with other local cultural activities for young people, e.g. drama centres or colleges.

This is also a group who will be receptive to brand associations – whether food, drink or retail.

Happy to travel into a city centre, they are more than likely to use the car, so parking facilities are important, as is security. At a local level, they may rely more on public transport, but will still probably choose to get around by car.

While able to afford a premium price on occasion, families in this group will still be looking for value for money – so family tickets (accommodating a range of family structures) will be welcomed as well as access to some discounts. The additional costs of a family outing should also be considered i.e. food and drink, while younger families will expect free or very low costs for local activities.

For larger shows or exhibitions Trips & Treats will expect to see prominent advertising and clear messages. If they commute they will look for street advertising, otherwise local newspapers and radio may be key sources. Word of mouth may be effective through provision of entertaining and engaging digital content which can be shared. This group are fairly responsive to direct emails or post, once engaged. Websites should be clear and informative, as they will be regularly visited once a family is interested. For more local activities, promotion via third party organisations at a community level may be effective – engaging local ‘advocates’ to help spread the word. While social media is a key influencer for this group, providing them with content through other digital channels to share and incentivising them to do this, may be most effective.

The participative route may be an effective entry route for many families into cultural activities. For younger families it will be about fun days and activity workshops programmed on a drop-in basis, and for older families more educational or structured participation or making i.e. half term ‘courses’. Connecting to local schools, nurseries or children’s centres offering outreach performances or workshops will also effectively introduce them to a different range of cultural events.

This group may consider themselves as potential givers for the right offer and benefits. Nurturing those already giving may be effective to understand what their motivations might be. Otherwise they may also respond well to one off appeals for particular projects relevant to families or which enhance their local offer. There will be limited scope for increasing volunteering, but they may for instance be interested in supporting fundraising with their time.

Relationship building could initially be focused on attracting them for regular annual events in the programme or for annual treats – for instance around birthdays or anniversaries when the family would like to celebrate together. Using that as a starting point frequency could be developed with a variety of offers. Good relations will rely on a high level of customer service and guaranteed experiences, which will encourage a family to repeat visit. Attention to the whole experience may also keep them coming back with the potential for loyalty to a particular organisation or venue activity.

Understanding the local population and where there is greater potential amongst this group can be supported by targeted door to door or digital marketing campaigns in key geographic areas. Diversity in programming will bring a range of age-ranges, and organisations should consider the entire offer for meeting those different needs in different ways.